Do your children spend hours every day on a games console or surfing the net? Are you aware of how bad this is for their physical and mental health?

Kids who spend more time on vigorous outdoor activities are healthier, happier, brighter, and grow up to be better-adjusted adults.

And what I’m saying doesn’t only apply to your sons and daughters. You too could benefit from switching off the TV, getting out of your armchair, and doing something active. Any activity which gets you on your feet is potentially beneficial to your health.

Why Are Active Kids (And Their Parents!) Healthier?

Our bodies were not designed for long periods of sitting. Every day, our children sit on the school bus, sit in the classroom, sit in the cafeteria, and come home to sit in front of their computer. This is unnatural and bad for their long-term health.

In 2008, the American Heart Association published an academic article concluding: “It is time to consider excessive sitting a serious health hazard”.

And in 2011, the Center for Disease Control conducted a scientific study that proved reducing time sitting by just over an hour per day improves mood states and halves neck and back pain.

So, if you want happier and healthier kids, it’s important that you kick them off the sofa and encourage them to participate in more standing activities. You can start your children young by encouraging them to play in the backyard rather than sitting in front of the TV. Buy a swing set and slide they can climb all over and a trampoline for them to jump up and down on.

In the summer, encourage them to splash around in an inflatable pool and maybe buy them a set of water guns to chase each other around the yard.

Once they’re ready to progress out into the wider world, the best thing to buy them is a kids’ scooter. Of course, you won’t want your young children out there on their own, so get yourself an adult scooter so you can show them how it’s done.

Or maybe just watch them and learn how yourself!

As your children grow older and more adventurous, they’re going to want to do something a little more adrenaline-fueled. That’s when they’ll trade in their scooter for a beginner’s skateboard.

Get ready to close your eyes and hold on to your heart while your kids try out some crazy moves in the halfpipe. Just to be on the safe side, dress them in a helmet and some protective pads.

Once they’ve become proficient on their beginners skateboard, they might want to trade up to a longboard. These long skateboards were originally used by surfers to practice their moves when the waves wouldn’t oblige.

If you want to keep up with your speedy kids on their skateboards, why not buy an electric skateboard? These handy gadgets look like skateboards but come with a powerful electric motor that will help you keep pace with your teenaged children.

For me, the ultimate adrenaline rush came when my kids decided to try out inline skates. Made to imitate ice skates, my sons zipped along the park paths like bats out of Hell. Although I was wearing more traditional roller skates, I simply couldn’t keep up!

If you’ve got daughters, an increasingly popular sport played on roller skates is roller derby. In some ways, it’s like American Football on wheels.

The girls must tackle members of the opposing team and push one another around. In the past, this vicious sport was traditionally played by all-female teams, but now mixed-gender and all-male teams are emerging. These days it seems many schools and children’s organizations dislike competition. They discourage keeping score and give every child the same prize on sports day.

But humans are naturally territorial and will always compete for limited resources. That is as true in today’s cutthroat business world as it was in the Paleolithic hunting grounds.

In disallowing competition, schools are not preparing children for adult realities. They are creating a future society of mediocrity and producing a steady stream of ill-prepared young adults.

When children compete, they are encouraged to learn from their mistakes and strive for excellence. When they win, or simply play well, they grow in confidence.

If you want to mentally prepare your kids for adult life, encourage them to take up competitive sports like badminton. Many schools have badminton teams, so maybe you can encourage your children to join a team.

A great idea is to buy a ping pong table and 2 paddles for your home. Then you can challenge your kids to a fast-moving game and get your heart racing. Ping pong is a fantastic sport for cardiovascular workouts. Just don’t be a sore loser!

Your children benefit even more from competition when they’re part of a team. The lessons they learn from teamwork during childhood are directly transferable into their adult life in the workplace.

Following the rules in a competitive sport teaches children about how the world works, with laws and social responsibilities. It encourages them to develop respect for authority in the form of a referee and officials who attend matches.

Kids also learn respect for their opponents when competing with other teams. Sportsmanship is a virtue encouraged by all the junior leagues. The respect your children learn for rules, authority figures, and their peers prepares them for adult life.

Working in a team with other children, your kids will learn to handle social situations better. They’ll also develop a stronger sense of community and camaraderie.

The necessity to communicate within a team means that your kids become better communicators. Not only will your children communicate better, but they’ll also grow in self-esteem as they become fast friends with their teammates.

The ultimate team sport is Capture the Flag, especially when played using a paintball gun. In order to beat the opposing team, your children must communicate effectively with their fellow team members, draw up a cunning plan, and execute said plan.

Running across the landscape and diving for cover is great exercise, and aiming the gun improves their hand to eye coordination.

But it’s always important to wear the correct safety equipment when playing any sport, like the paintball mask that protects participants’ eyes during a round of Capture the Flag.

And whenever your children get involved in a serious team activity, ensure that the coaches and their assistants are professionally qualified to work with children. Usually this is certified by membership of an official sporting association.

Even an activity that doesn’t involve vigorous movement, like throwing darts at a dartboard, is beneficial for your children if it means they are standing rather than sitting. Often such activities will provide other benefits, like improving hand to eye coordination.

Any activity that is competitive helps your child’s psychological development, even playing on a foosball table or an air hockey table. One table game that’s especially popular with all ages is table shuffleboard. There’s nothing more embarrassing than being completely owned at shuffleboard by your kids!

But an activity doesn’t even have to be competitive for your children to reap significant benefits. Taking your children to an old Civil War battlefield with a metal detector (where it is allowed by the landowner and relevant authorities) gives them an appreciation for history and tangible excitement when an old bullet, button, or coin is unearthed.

Push Your Kids Off The Sofa And Send Them Outside!

It doesn’t really matter what kind of activity you and your children get up to as long as it gets you all on your feet. A sedentary lifestyle is seriously bad for your health, but any competitive activity provides numerous physical and mental health benefits.

So, drag your rug rats away from their computer screens and get them doing something active. 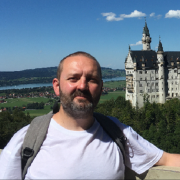 Robert is a content writer and editor at Outside Pursuits where he shares his love for the great outdoors. He also writes in-depth travel blogs for other websites around the world. Robert is passionate about the environment and uses his writing to educate people about the advantages and importance of sustainable living. Robert enjoys creative writing. In 2009, his children’s novel Sally Hemings & the Good Associates won the Children’s Fiction section of the You Write On Book of the Year Award.